Written by Alistair Evans
Apr 5, 2022
14 min read
How our socket code in Enclave squeezes the maximum performance out of UDP in .NET 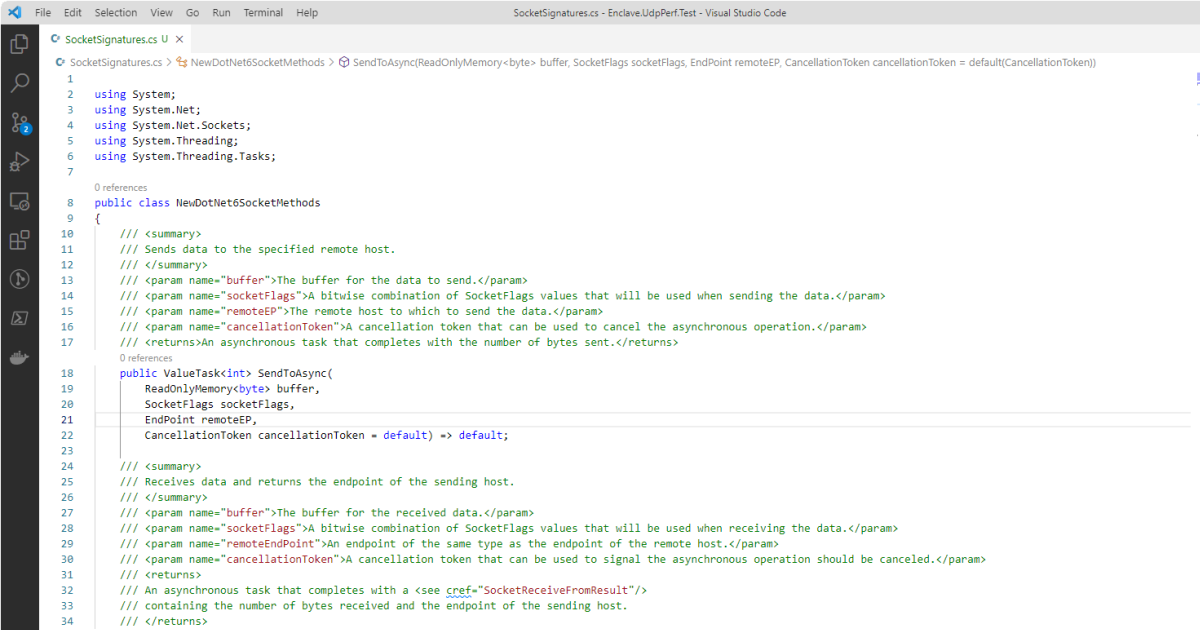 This is a follow-up post to my original post on doing high-performance UDP in .NET 5. In .NET 5, we had to add a pretty complicated custom implementation of SocketAsyncEventArgs. Since then, in .NET 6 the .NET runtime team have added new functionality to the Socket class that renders that no longer necessary, and this post reflects the changes.

If you’re still on .NET 5 (you should probably upgrade since .NET 6 is LTS), head over to the original.

.NET 6 has a lot of options to help with this, but one of the features that helps us the most when we’re doing our async IO is the availability of ValueTask and IValueTaskSource, which avoids additional allocations where possible (as opposed to Task).

The .NET Socket has a number of overloads of SendTo, SendToAsync, ReceiveFrom and ReceiveFromAsync. Which one you choose to use has a huge impact on your performance. If you take what we’ve mentioned so far around allocations and the use of Memory<byte> and ValueTask, that helps us select the methods we want to use.

First up is the ReceiveFromAsync method. The one we want (from a performance perspective) takes a Memory<byte> argument and returns a ValueTask<SocketReceiveFromResult>.

Set remoteEndPoint to an instance of new IPEndPoint(IPAddress.Any, 0) to receive packets from any sender.

The Memory<byte> buffer you provide should be big-enough to fit an entire UDP packet, e.g. 65527 bytes, otherwise the received packet may be truncated and you will get a WSAEMSGSIZE error from the operation.

The SocketReceiveFromResult is a struct that contains the EndPoint that sent the packet, plus the number of bytes that were read into the provided buffer. You can use this to get a slice of the buffer without copying, that contains just the received packet:

For the send operation, we want SendToAsync. It accepts a read-only buffer, and returns the number of bytes sent when the ValueTask completes.

The use of ValueTask allows these socket methods to reduce the number of allocations for receiving packets to zero in most cases.

How does it do this? Just using ValueTask isn’t enough to get allocations to zero, right?

The trick is that behind the scenes the Socket class uses a shared instance of an internal AwaitableSocketAsyncEventArgs class which implements the super-interesting IValueTaskSource interface.

Because the instance of AwaitableSocketAsyncEventArgs the Socket class uses is reset after each IO operation, each call to ReceiveAsync will use the same object.

Only a single shared instance of that class is held by the socket for each IO ‘direction’ (one for read, one for writes); if an IO operation is initiated while the other is pending, it will allocate a new instance.

Every time .NET needs to pass a block of memory managed by the garbage collector to native code (e.g. the Win32 recvfrom method), it must “pin” that memory, so that while the native code is executing, the GC does not move that memory during compaction.

Pinning a buffer allocated in the normal SOH (Small Object Heap) or LOH (Large Object Heap) repeatedly has overheads, not just with the pinning operation itself, but it can slow down the GC to have a lot of pinned objects in the SOH and LOH, because the GC has to effectively “work around” them.

In .NET 5, the runtime added the concept of a Pinned Object Heap (POH) which is an area designed to hold buffers intended for native IO operations; it was initially needed for improving the performance of sockets in ASP.NET Core HTTP request handling.

You can allocate a pinned array of bytes like this:

As the name might suggest, the POH never compacts or moves the memory allocated there, and so saves CPU time in the GC and during IO operations.

The POH is designed for small numbers of large buffers, as opposed to a huge number of individual buffers. If you need a lot of smaller pinned buffers, it can be wise to allocate a large array from the POH, then sub-divide it into individual buffers using Memory<byte>.Slice.

In our code used for the tests below, we allocate a single receive buffer from the POH, and use it for every read. 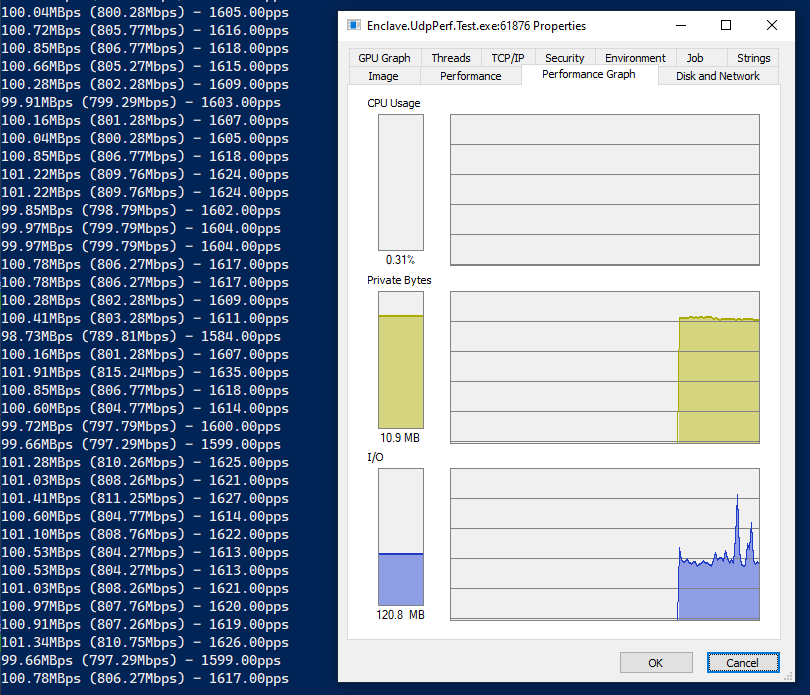 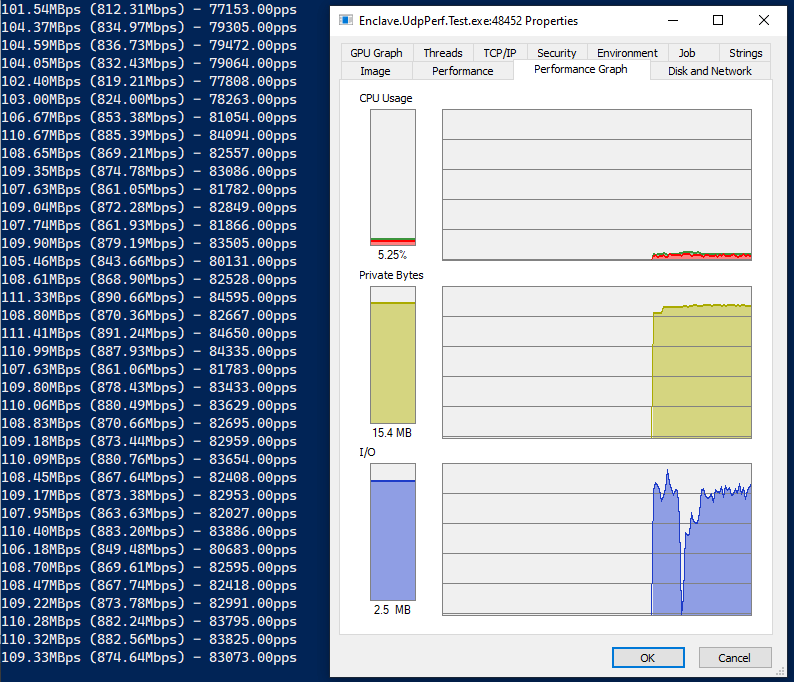 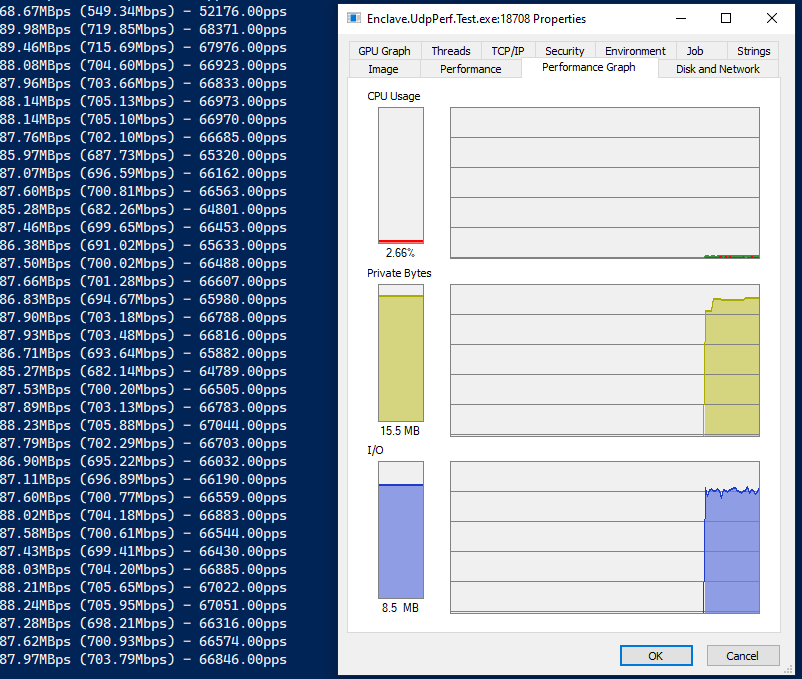 There is an open issue in the runtime repo tracking the desire for allocation-free UDP APIs, but I suspect we may be waiting a little while.

Hopefully this gives you some tips for using high-performance UDP sockets (and perhaps IO in general) in your app. As linked at the start, you can grab all this code on our Github: https://github.com/enclave-networks/research.udp-perf.